Go Directly To Rewards
Welcome to the PledgeManager for Mint Condition Comics, a neat game about comic books!
If you missed our campaign, don't dismay! Just choose an option below. 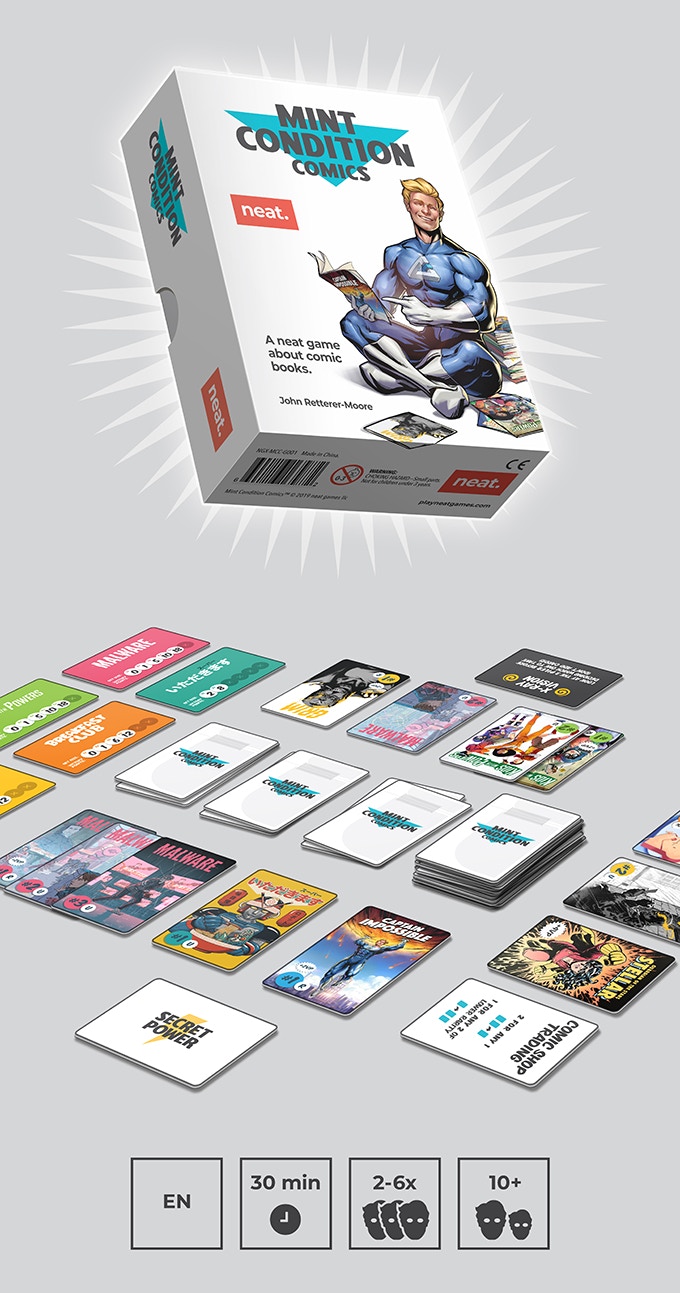 After Too Many Poops (and the infamous Poople that changed the world forever), now comes a neat game about comic books by John Retterer-Moore! 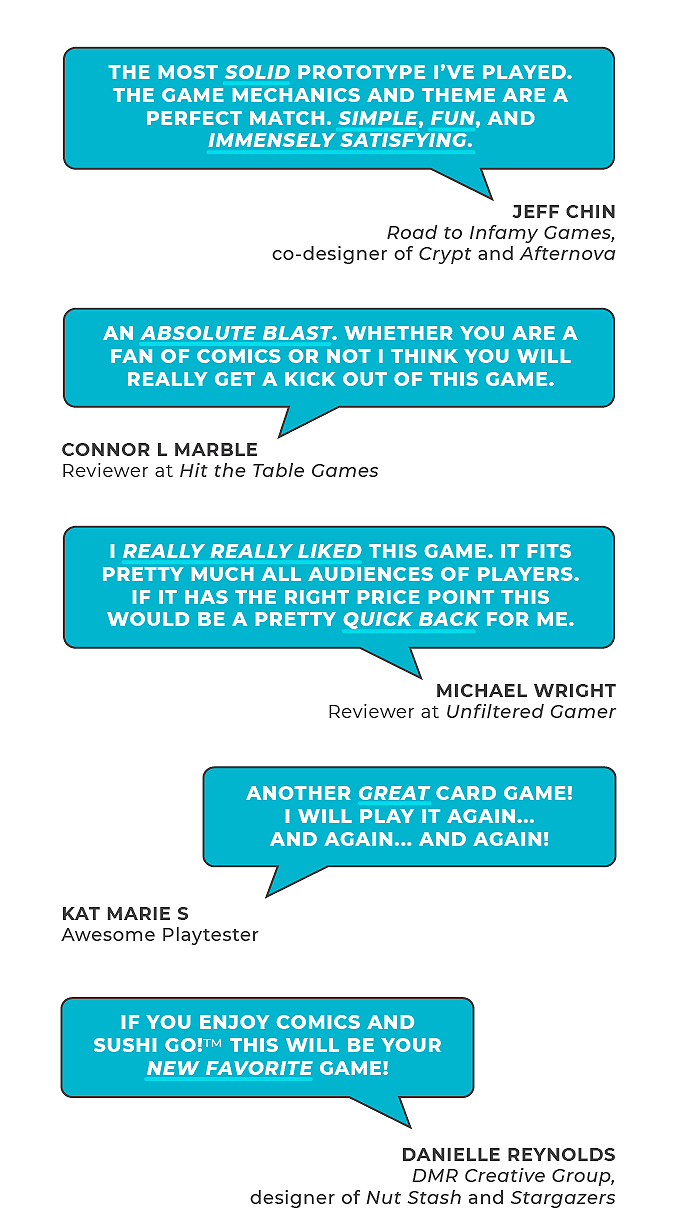 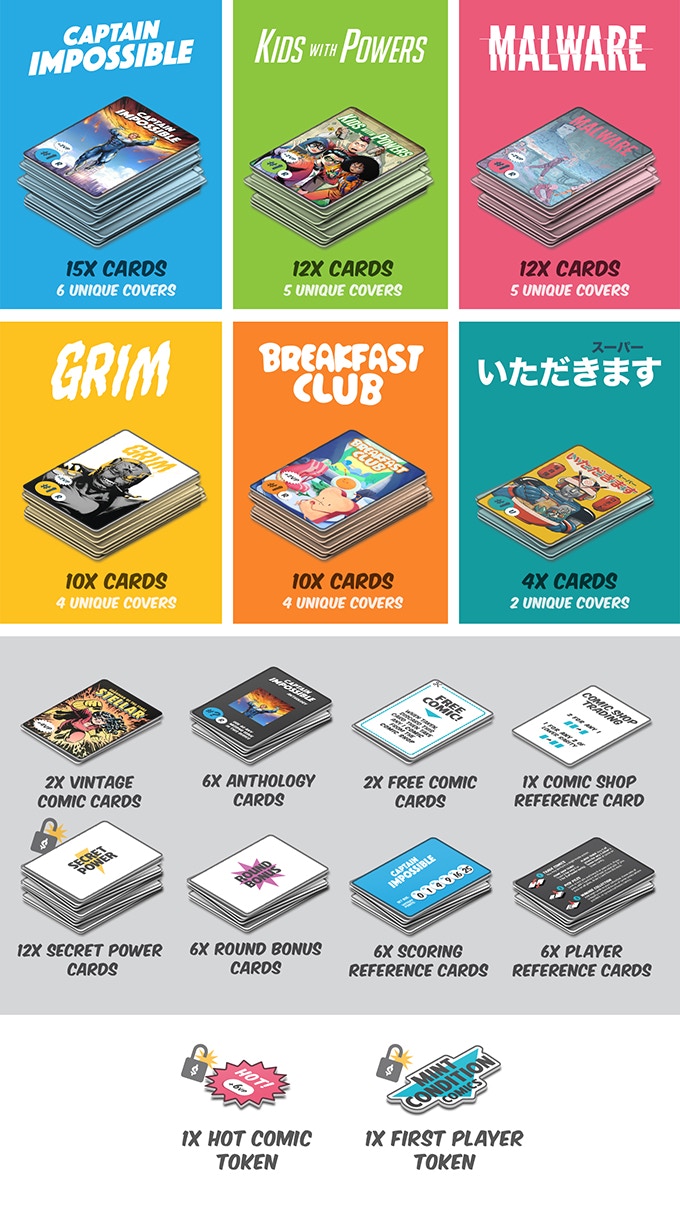 The game is typically played for 3 rounds. Each round players take turns trading, picking, and managing comics in their collections until all the cards have run out.

You start by choosing to make a trade with either the Comic Shop or another player.

If you trade with the Comic Shop, you can make two for one or one for two trades depending on the rarity of the comics. 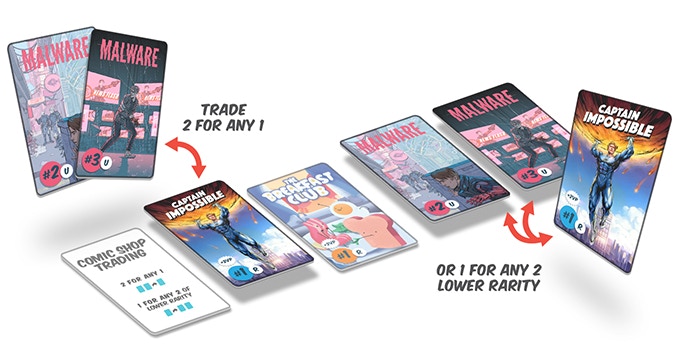 If instead you choose to trade with a player, you can make one for one trades of equal or lower rarity so long as the other player's comic is loose (not part of a set).

You'll get to rummage through three piles of comics and decide which one to add to your collection. Any pile you don't pick gets sweetened with an extra card for the next player. 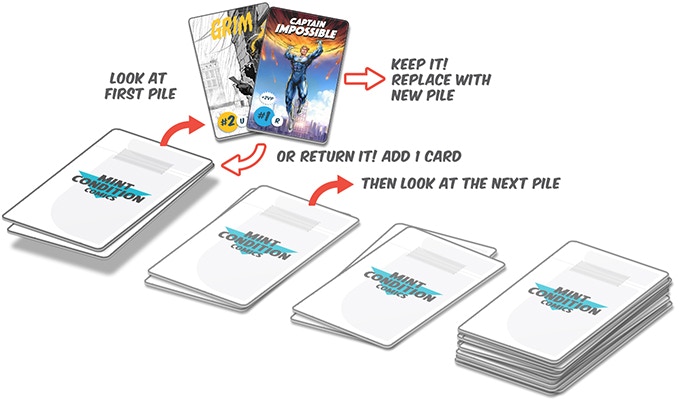 After picking a pile the comics get added to your collection in front of you. You'll form sets where possible for each series, or keep some comics loose.

The more complete your sets in a given series the more points you'll score at the end of the round. Each round there's also special collector bonuses you can try to take away from the other players!

At the end of the game, the player with the most points is the ultimate comic book collector!

The game also features special Secret Powers that you'll change every round! With Secret Powers you can look at all the piles, get free comics, get trade advantages, and more!

We'd love to hear Secret Power suggestions in our comments section so that we can unlock more Secret Powers during the campaign!

Check out the following videos or download the game rules below to learn even more about how the game is played. And if you'd like to try it out, scroll further down the page to find a version you can print and play at home! 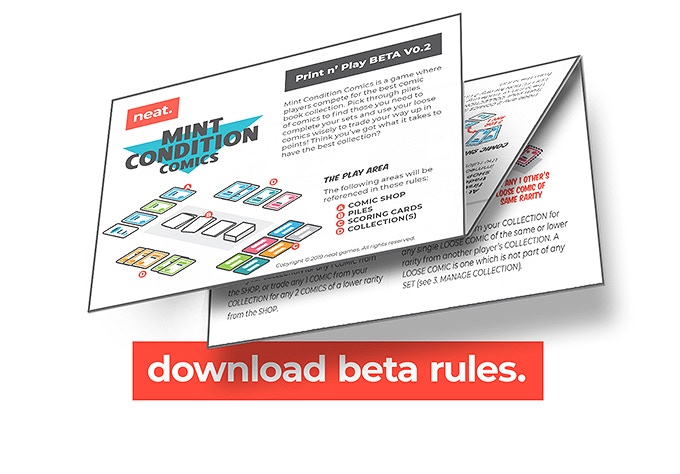 We've teamed up with some great artists to bring the cards in Mint Condition Comics, and their unique stories, to life. 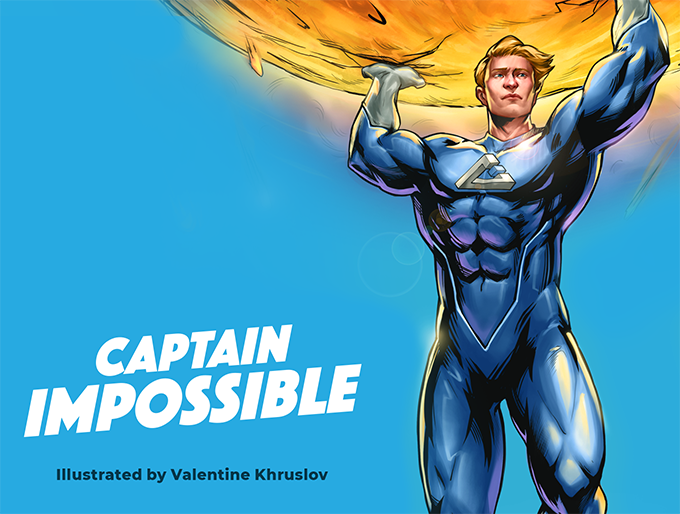 Captain Impossible is the quintessential superhero: incredibly powerful, pure of heart, and loved by all. Except of course for his nemesis, the equally powerful (and frighteningly so) Hazard. The comic cards in Captain Impossible chronicle the clash between these two stunningly illustrated characters, with art by Valentine Khruslov. 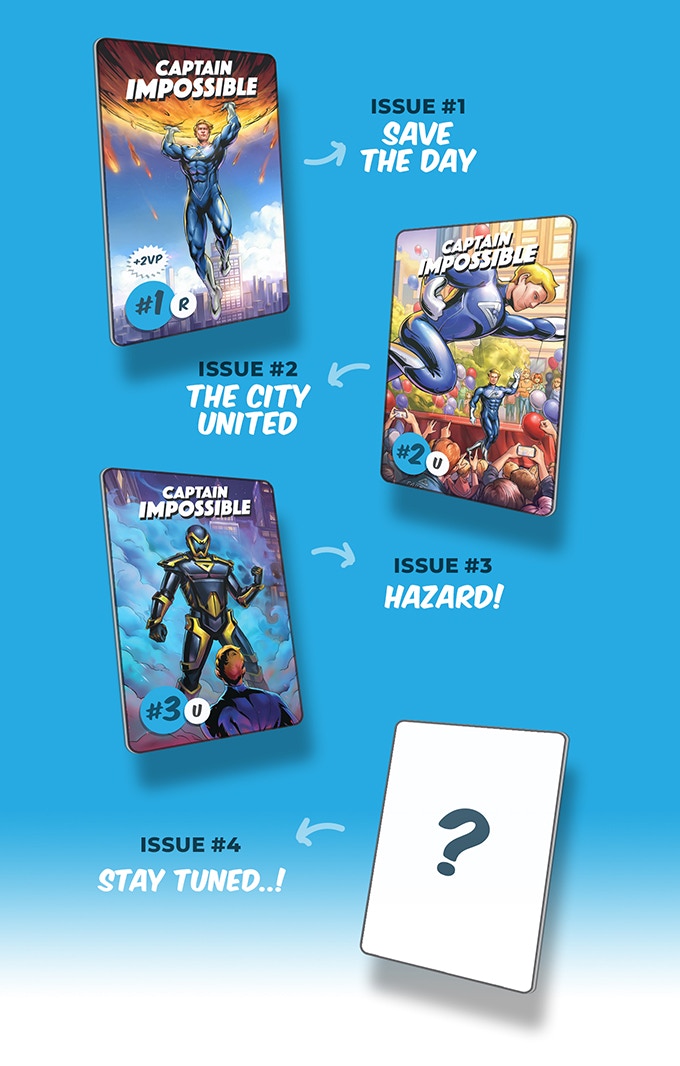 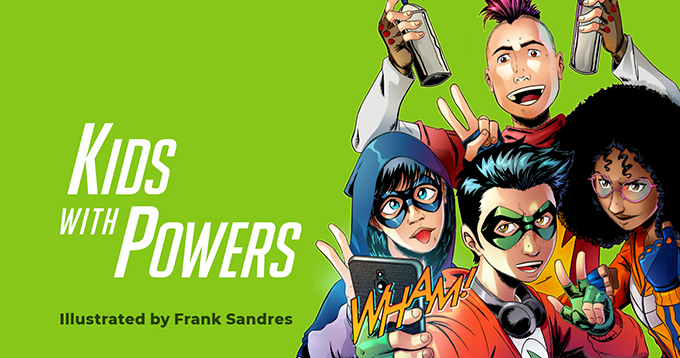 The Kids with Powers were brought together by their unique super powers, but they stayed with each other when they realized that together they can overcome anything. Follow Stacy Strong, Phosphor, Dart Boy, and Ollie in the story of how these kids with powers became great superheroes with great responsibilities. 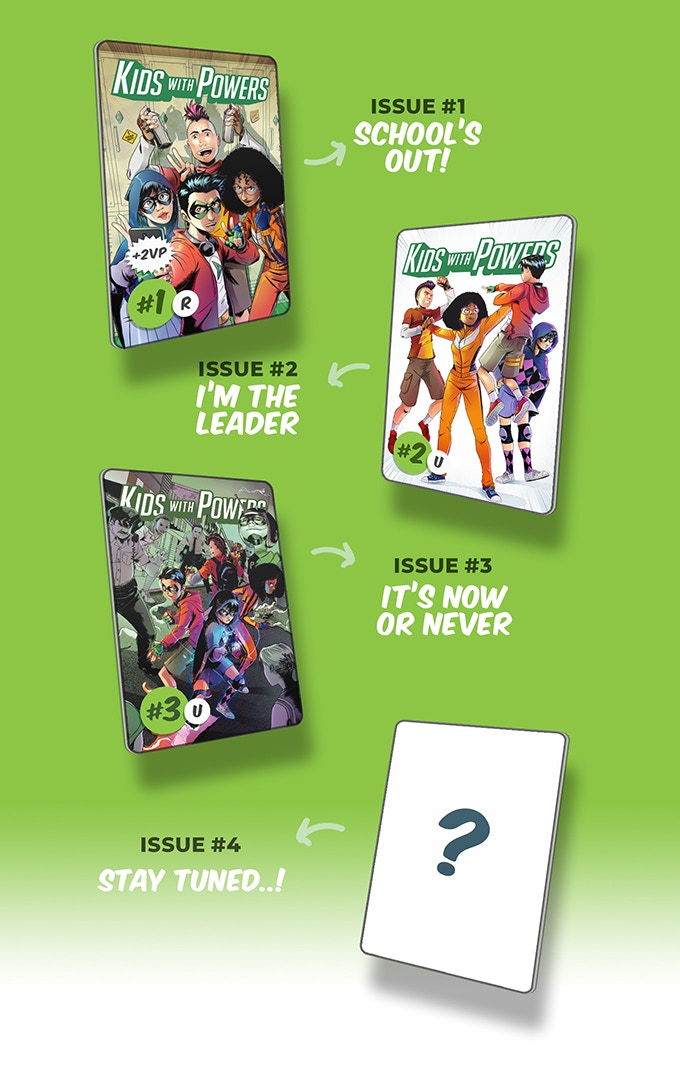 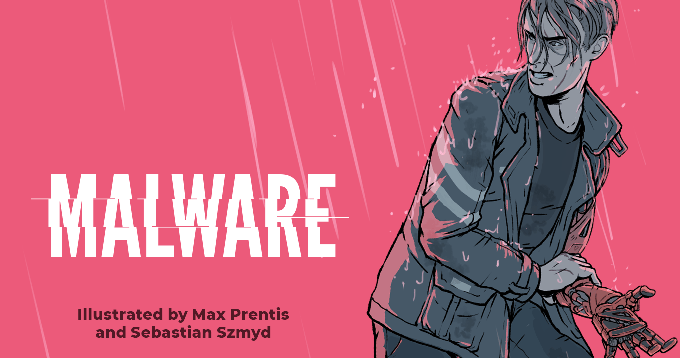 Malware tells the story of a futuristic world where body modifications and biotech are the norm. A man finds himself waking up each morning with no memory of the previous night only to slowly piece together that someone's been hacking into his biomechanics and using him to execute all manner of crimes. Malware's gorgeous art is vibrantly illustrated by Max Prentis and Sebastian Szmyd. 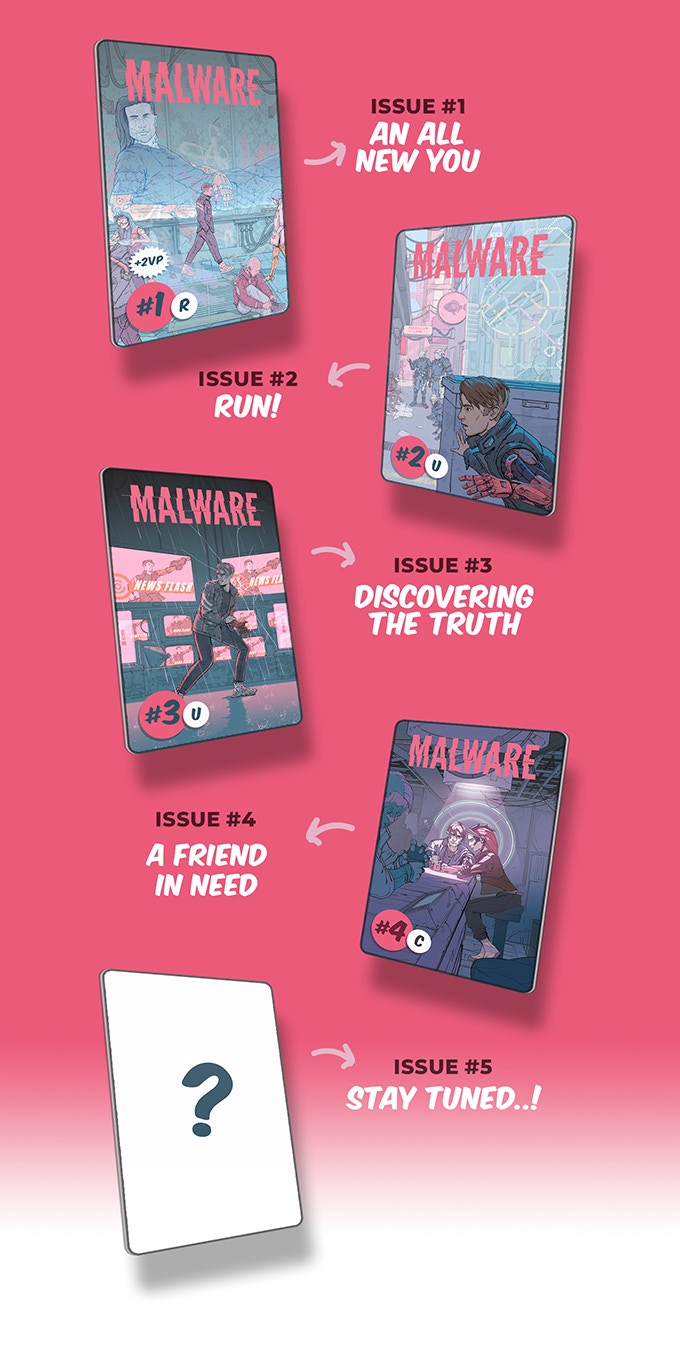 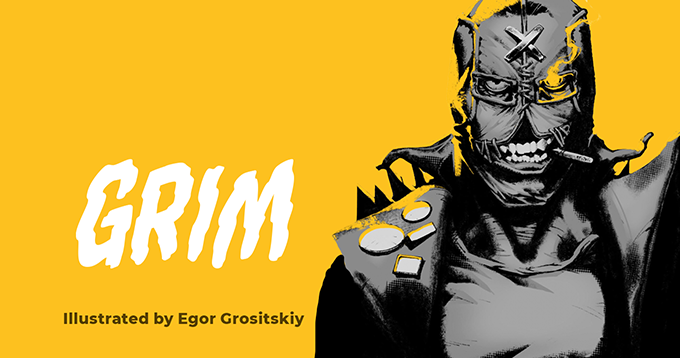 He's a maniac, a brawler, and a grinner -- but ultimately, GRIM is an antihero who's been wronged. Turned into a grotesque monster and forced to leave his past behind, GRIM won't give up just yet. GRIM tells a story of revenge in a dark world and is brought to life in beautiful high contrasts by Egor Grositskiy. 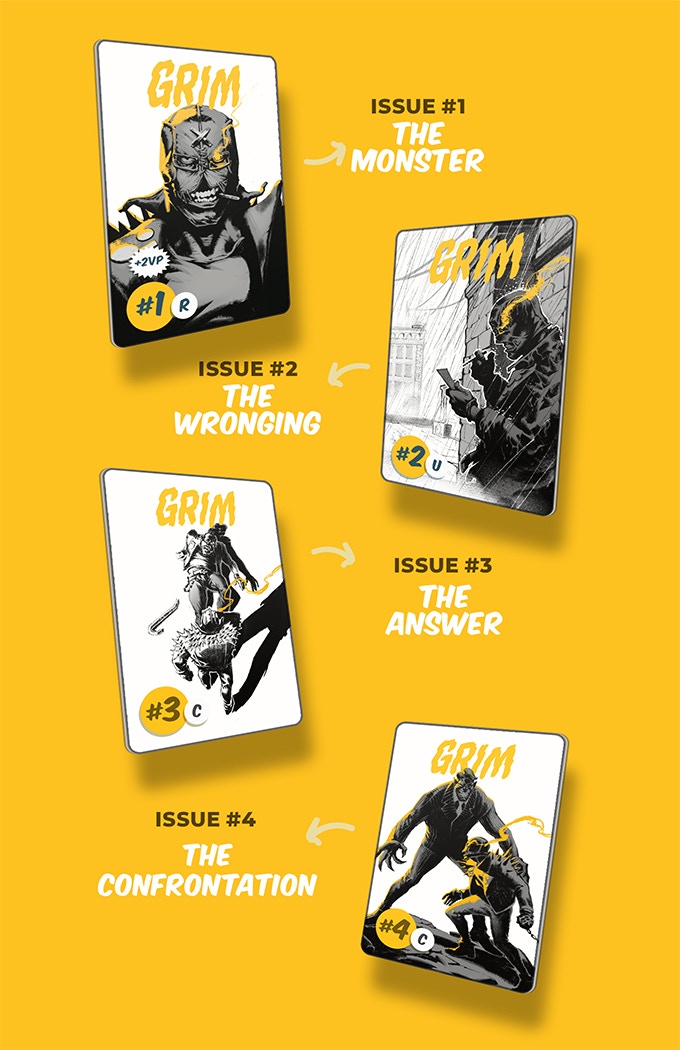 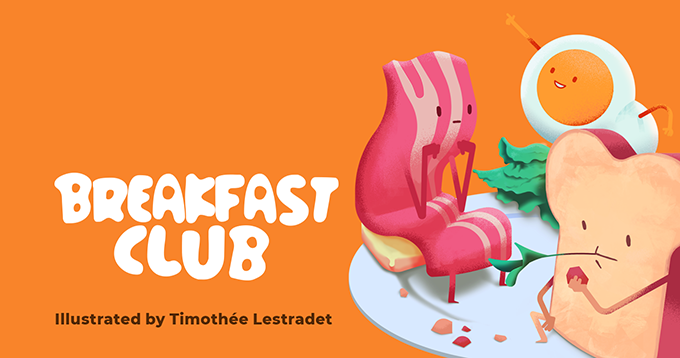 It's no fun being breakfast. But it should be! The Breakfast Club chronicles the antics of a group of ordinary breakfast items looking to do the extraordinary: break out and go out on adventure! Join the club as they fend off giant creatures, discover hidden caves, and maybe find some treasure. Featuring the gorgeous illustrations of Timotheé Lestradet. 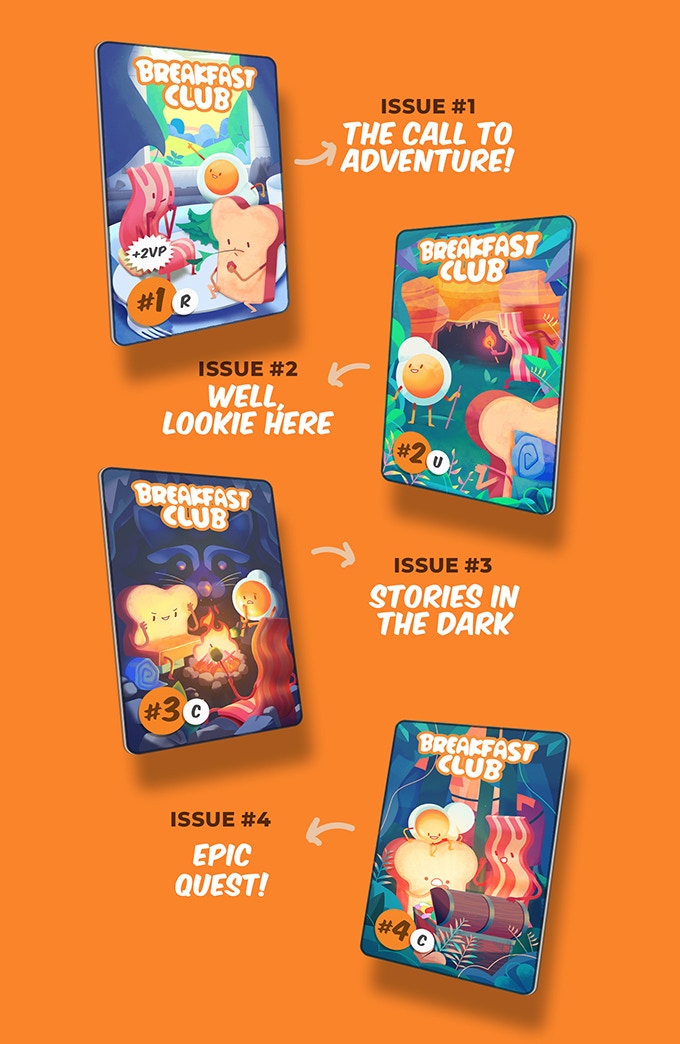 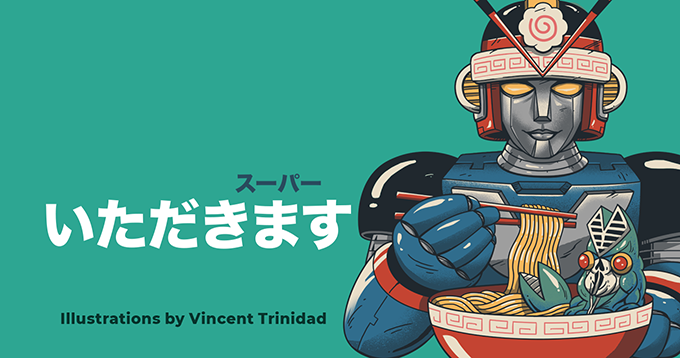 スーパー いただきます (Super Itadakimasu, or Super Bon Appetit) is an imported manga about robots and the delicious japanese dishes they've set their eyes on destroying. We don't know too much more about this series because, well... we can't read Japanese. Using the fantastic illustrations of Vincent Trinidad! 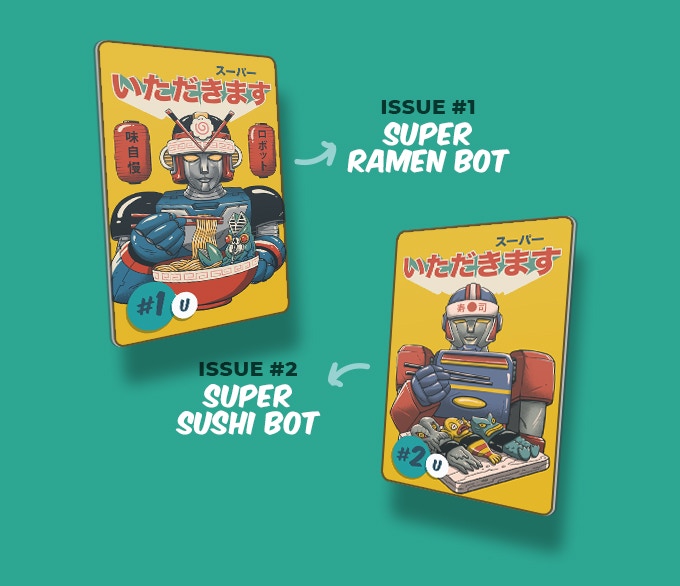 And featuring Stellar, the Guardian of the Stars -- our vintage superhero comic about an amazing and all powerful protector in the skies. A rare find in the game! Dazzling art by the phenomenal Brian Level. 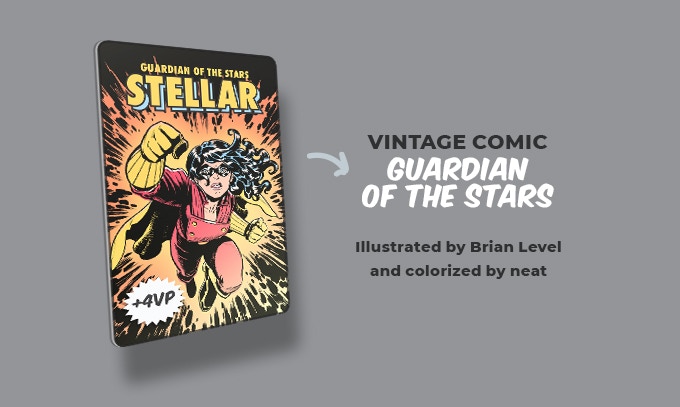 Can't wait to check out Mint Condition Comics or want to try it out before you pledge? Signup and download a FREE beta version you can print and play at home! 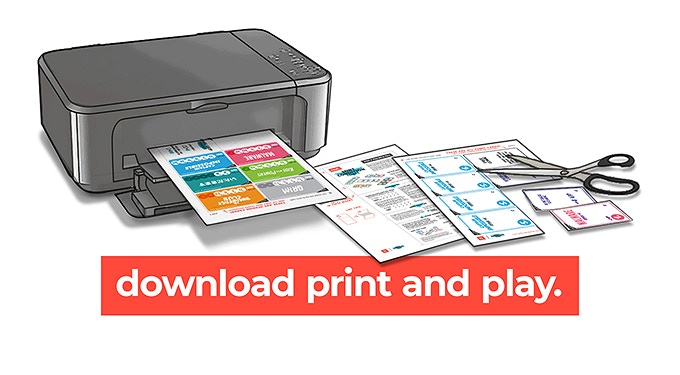 How is this beta version different? We expect to continue to improve the game throughout the campaign and that there will be rules and card changes in the published version. This print and play also doesn't feature any of the amazing art we've developed for this game, nor any of the unlocked stretch goals!

We’re incredibly happy to be back on Kickstarter and to bring you Mint Condition Comics, our second release under neat games! This time we're working with one of our great friends, John Retterer-Moore.

A mathematician, musician, and avid board game player & designer, fascinated with how the details and decisions of games combine to make something that's consistently fun to play. Currently works as a software engineer, but is also involved in a variety of creative pursuits - in addition to enjoying and creating games, you can often find him on stage with his rock band Lemon Knife or his improv comedy group The Emeralds of Saigon.

neat games was founded in late 2018 by Miguel Martinez and Aaron Burghard to design, develop, and release Too Many Poops. Miguel and Aaron have a shared background in graphic design, branding, and consulting for innovation in product and service development, as well as a shared love of games.

Like our previous game this is a labor of love and a theme that is close to our hearts. If you love comics (and gorgeous artwork), we really hope you’ll back and enjoy this amazing game.

Stay in touch with us through the following links: 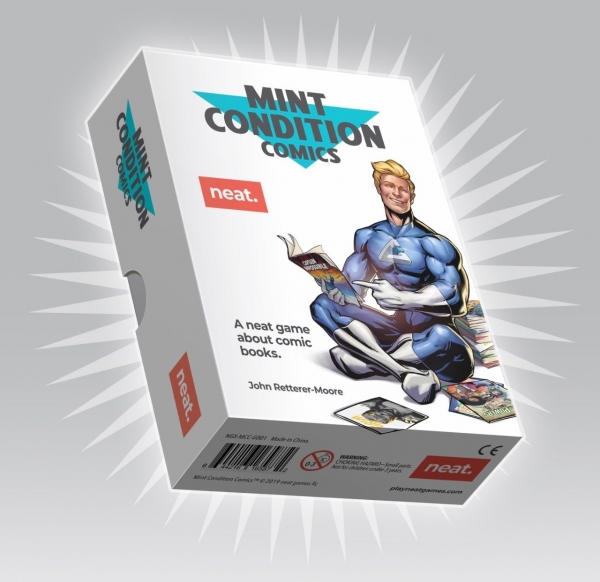 Get your copy of Mint Condition Comics! 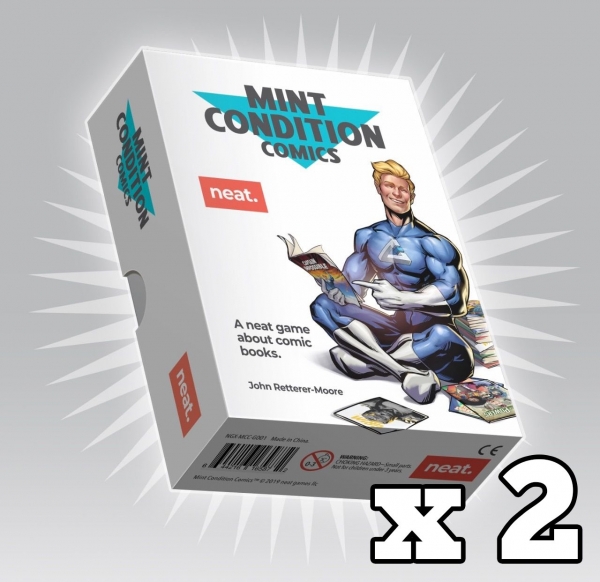 Share with a friend and get two copies of Mint Condition Comics! 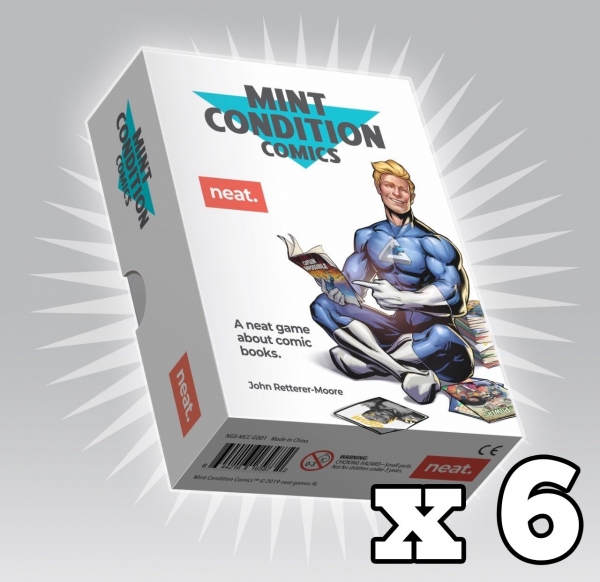 Get a group of comics loving friends to pledge for six copies of Mint Condition Comics ($120 MSRP) and save an extra $10!

One last step to go!

Share your email, we will send you an invite!

If you're already have a PledgeManager account from another project, just sign in using the button below to join the project.

Complete your information below and we will send you an email to get started!